The Gulf Coast aquifer forms a wide belt along the Gulf of Mexico from Florida to Mexico. In Texas, the aquifer provides water to all or parts of 54 counties and extends from the Rio Grande northeastward to the Louisiana-Texas border. Municipal and irrigation uses account for 90 percent of the total pumpage from the aquifer. The Greater Houston metropolitan area is the largest municipal user, where well yields average about 1,600 gal/min.

The aquifer consists of complex interbedded clays, silts, sands, and gravels of Cenozoic age, which are hydrologically connected to form a large, leaky artesian aquifer system. This system comprises four major components consisting of the following generally recognized water-producing formations. The deepest is the Catahoula, which contains ground water near the outcrop in relatively restricted sand layers. Above the Catahoula is the Jasper aquifer, primarily contained within the Oakville Sandstone. The Burkeville confining layer separates the Jasper from the overlying Evangeline aquifer, which is contained within the Fleming and Goliad sands. The Chicot aquifer, or upper component of the Gulf Coast aquifer system, consists of the Lissie, Willis, Bentley, Montgomery, and Beaumont formations, and overlying alluvial deposits. Not all formations are present throughout the system, and nomenclature often differs from one end of the system to the other. Maximum total sand thickness ranges from 700 feet in the south to 1,300 feet in the northern extent. 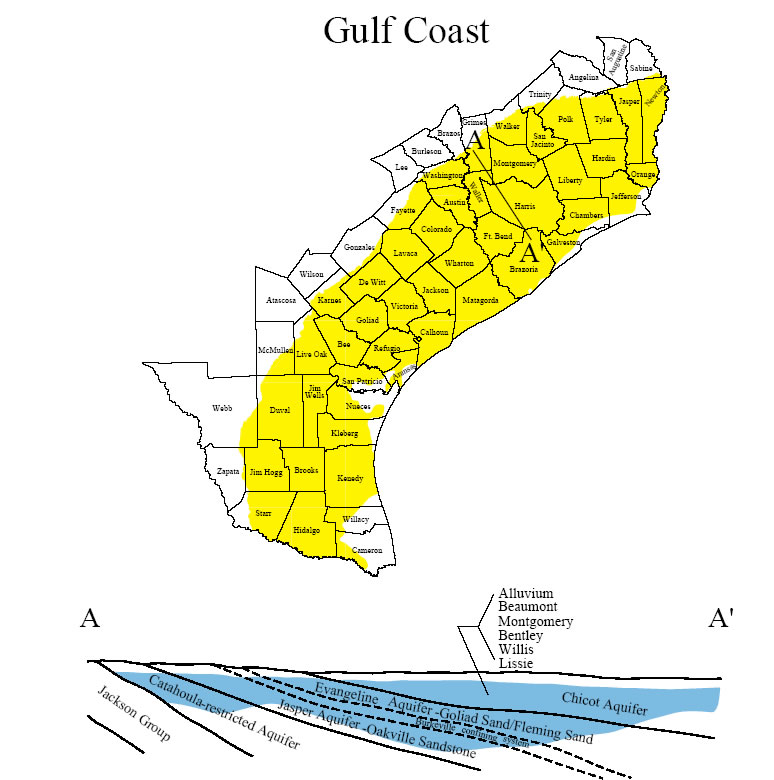 Water quality is generally good in the shallower portion of the aquifer. Ground water containing less than 500 mg/l dissolved solids is usually encountered to a maximum depth of 3,200 feet in the aquifer from the San Antonio River Basin northeastward to Louisiana. From the San Antonio River Basin southwestward to Mexico, quality deterioration is evident in the form of increased chloride concentration and saltwater encroachment along the coast. Little of this ground water is suitable for prolonged irrigation due to either high salinity or alkalinity, or both. In several areas at or near the coast, including Galveston Island and the central and southern parts of Orange County, heavy municipal or industrial pumpage had previously caused an updip migration, or saltwater intrusion, of poor-quality water into the aquifer. Recent reductions in pumpage here have resulted in a stabilization and, in some cases, even improvement of ground-water quality.

Years of heavy pumpage for municipal and manufacturing use in portions of the aquifer have resulted in areas of significant water-level decline. Declines of 200 feet to 300 feet have been measured in some areas of eastern and southeastern Harris and northern Galveston counties. Other areas of significant water-level declines include the Kingsville area in Kleberg County and portions of Jefferson, Orange, and Wharton counties. Some of these declines have resulted in compaction of dewatered clays and significant land surface subsidence. Subsidence is generally less than 0.5 foot over most of the Texas coast, but has been as much as nine feet in Harris and surrounding counties. As a result, structural damage and flooding have occurred in many low-lying areas along Galveston Bay in Baytown, Texas City, and Houston. Conversion to surface-water use in many of the problem areas has reversed the decline trend. 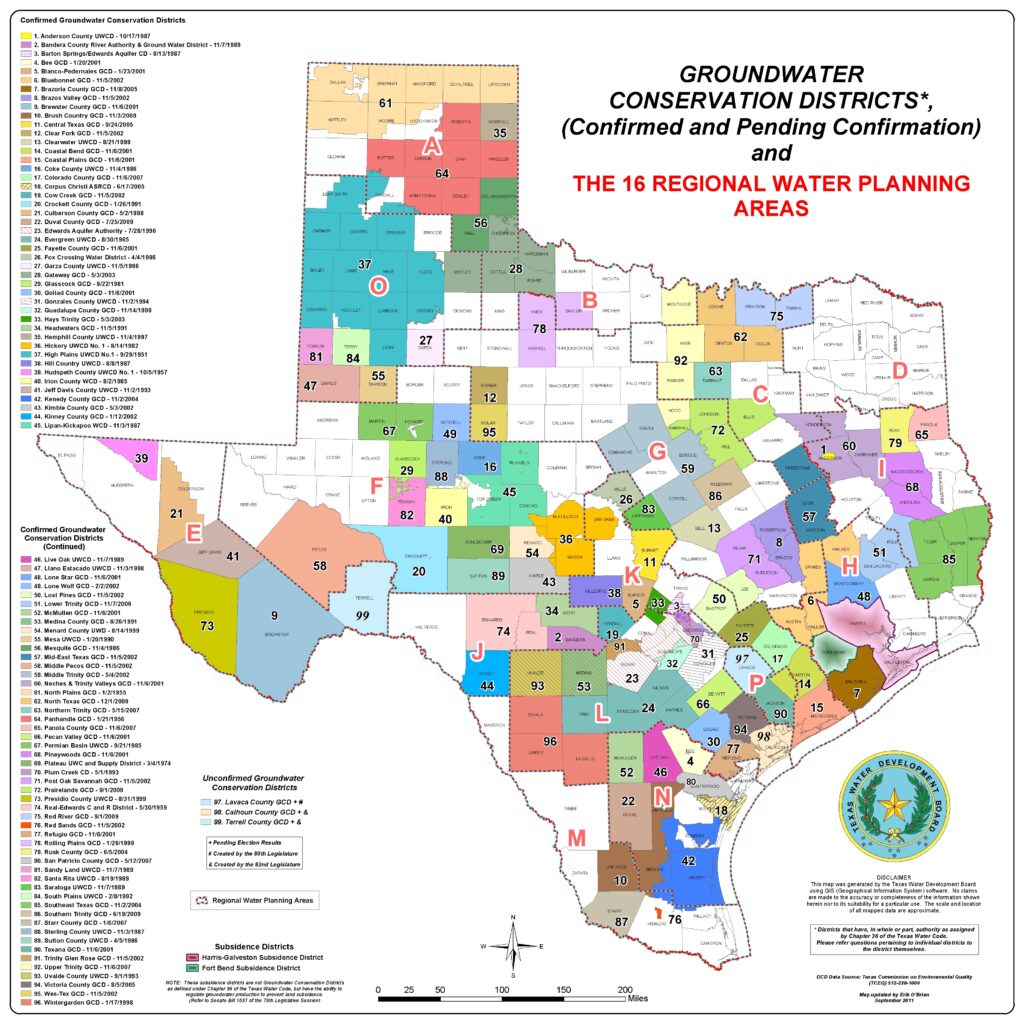 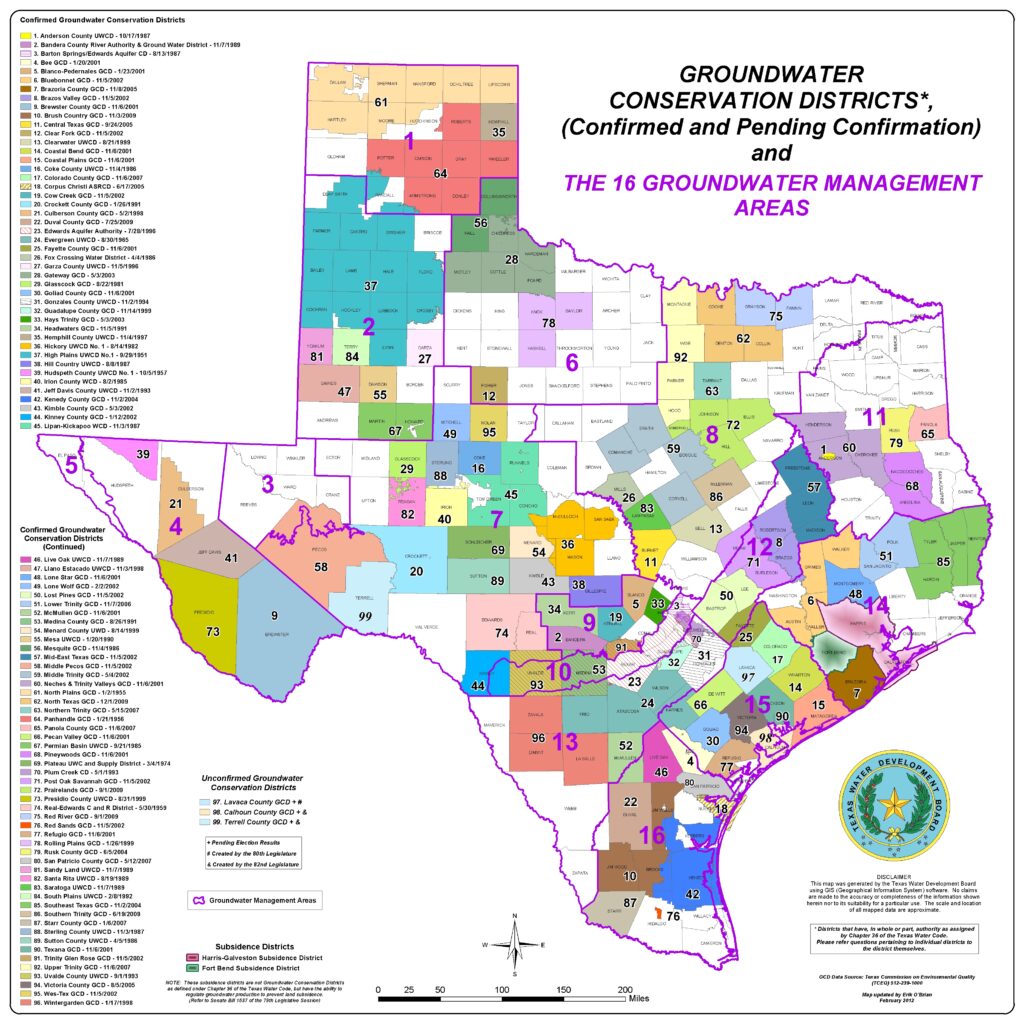 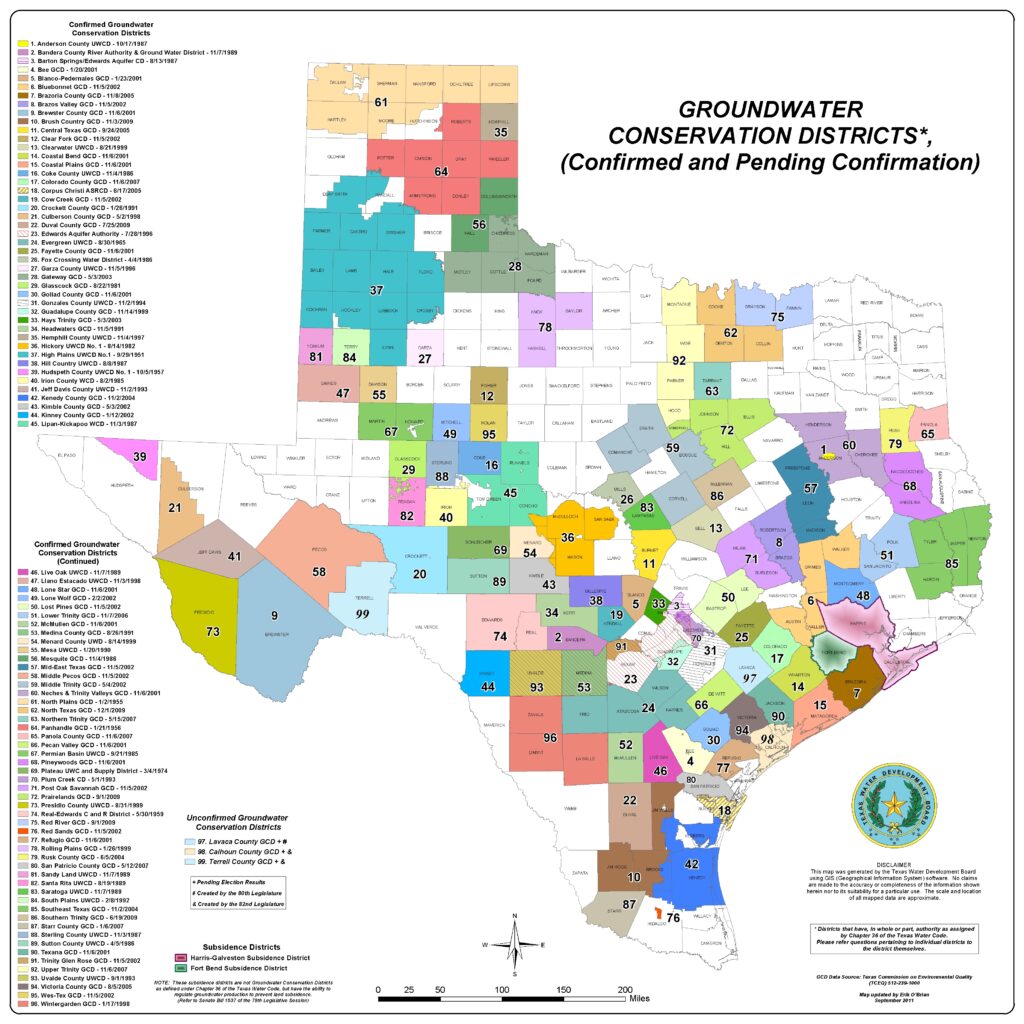 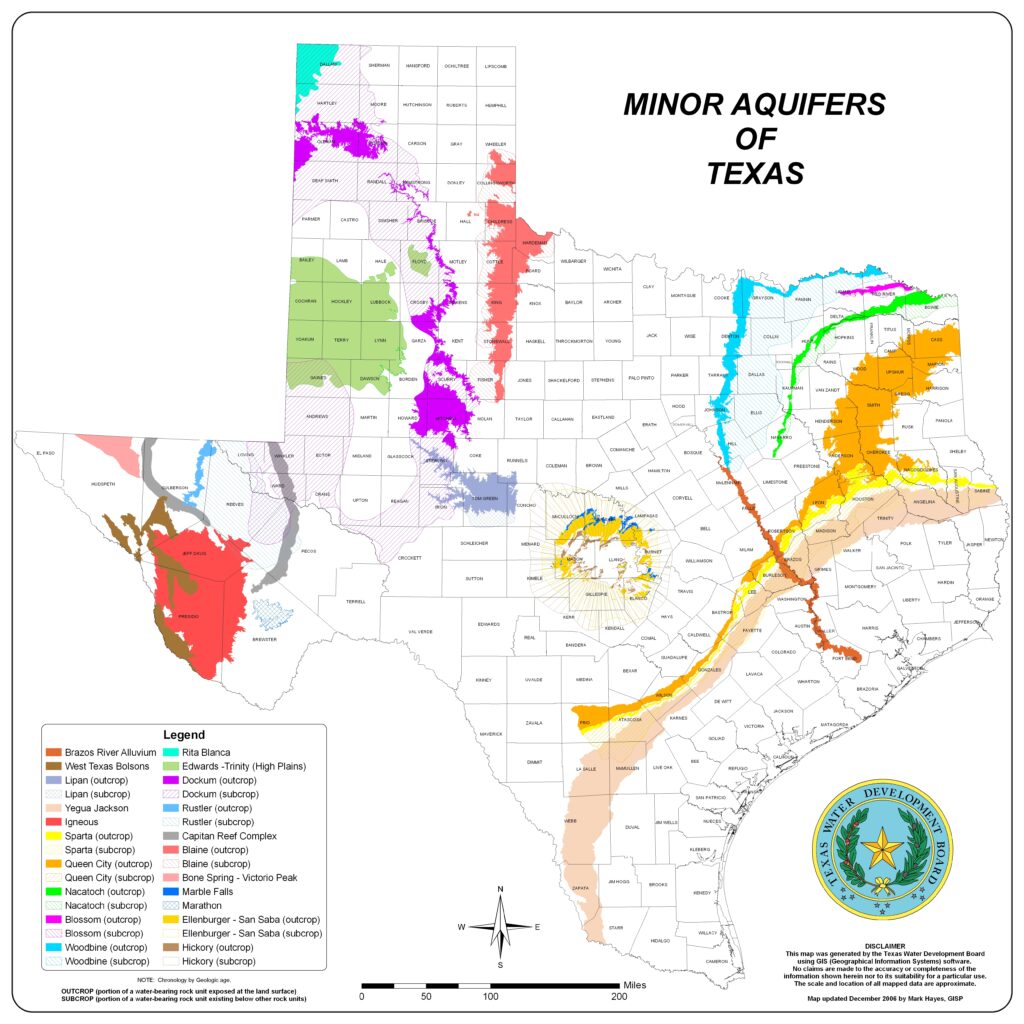 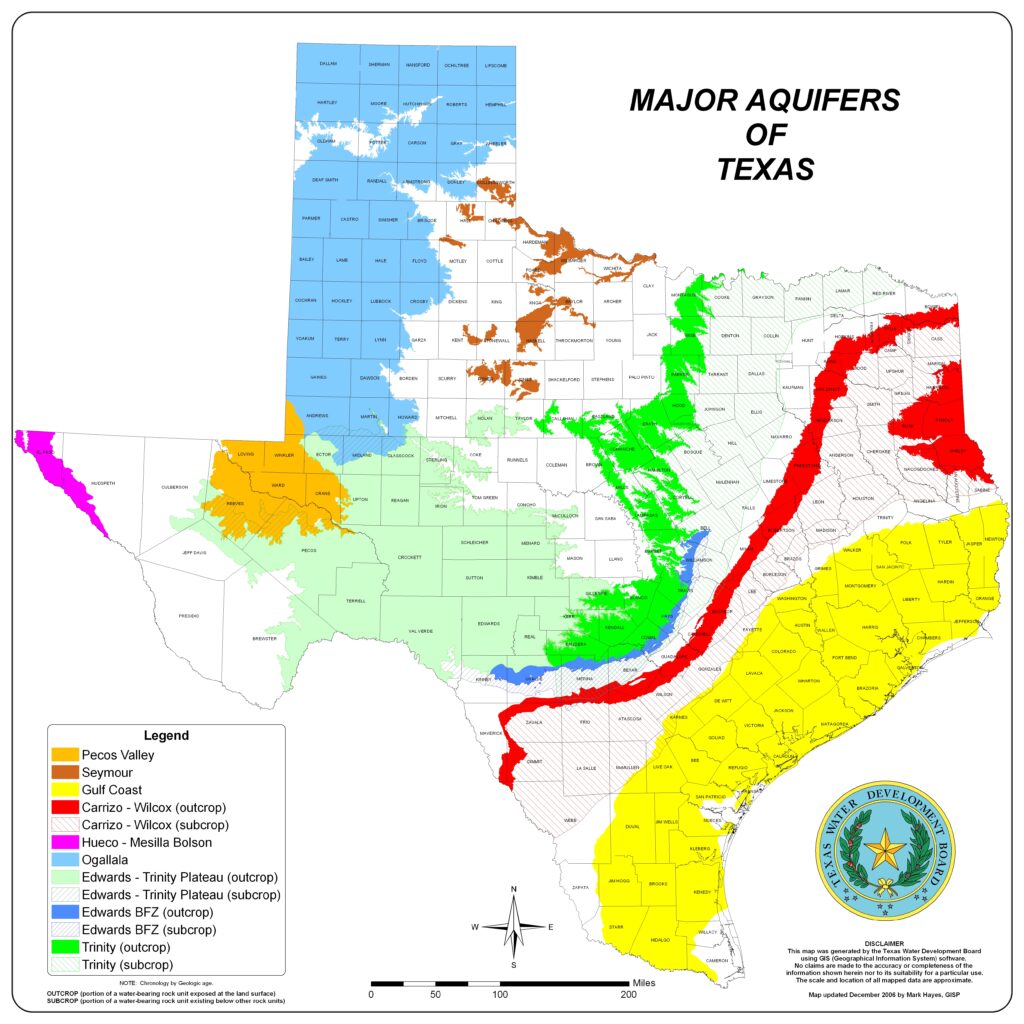